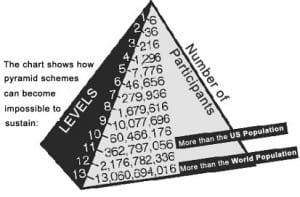 I am laughing out loud as I write this post and I’m about to tell you why.  Maybe we can have a laugh together.

This picture illustrates the argument used by many people to claim that network marketing and companies like ACN are pyramid schemes.

This argument states that because you’ll eventually run out of people in the world to provide revenue to the company or the project, that it must be a scam.

Ha, ha ha… If that’s the case then not only is there an ACN pyramid scheme, but every company in the world must be a scam because, “my goodness, they will eventually run out of people to sell stuff to”.

This is similar to people’s desire to be involved in network marketing opportunities only when “they are ground floor” or new to the market.

This is because people believe that after a  company has been on the market for a few years everyone will have already heard about it or have been enrolled into the company.

Do you realize that there are over 6 BILLION people on the planet.  The only company that may run out of people to market to is the Government.  🙂

Do you see how ridiculous this argument is?

More on Pyramid Schemes
“A pyramid scheme is a non-sustainable business model that involves the exchange of money primarily for enrolling other people into the scheme, without any product or service being delivered.”

Please, please, please read that definition and understand it so you don’t make a fool out of yourself the next time one of your friends or family members tells you about a network marketing project they are working on.

MLM and network marketing companies are perfectly legal because they sell a product or service in exchange for money.

The money is not received for “getting people into the program”.  This would be an illegal pyramid scheme.

I hope you can see why there is no ACN pyramid scheme.

Acn has been on the market since the 90’s, they do business in 20 countries and they they are the largest direct seller of telecommunication services.

This is the truth… THERE IS NO ACN PYRAMID SCHEME!

HOW TO MAKE A FORTUNE IN MLM
Now that that’s out of the way let me tell you why many people really don’t like MLM.

At some point in their lives, they were told that if they bought some stuff, told a few people about it and had them buy some stuff… and then watched that duplicate for a few months they’d become wealthy.

Well Bull! After 10 years in home business, I have to admit Network marketing doesn’t seem to work that way.

If you tell a few, odds are the few you told will sit around and do nothing.

MLM does work and it works beautifully for those that know how to work it. You need to go through lots of people so you can find the ones that will duplicate your efforts.

Traditionally, this has meant you had to talk to countless numbers of people.

With the internet, you can sort, sift and earn from many using systems.

Finding online marketing was a saving grace for my home based business.  If you haven’t looked into it yet, i recommend you at least check out what’s possible by grabbing my free training bootcamp at www.OnlineRecruitingSecrets.com.